In a pair of surprise (but not really so surprising) news releases this VERY early Monday, Sprint and Samsung are announcing the existence of another Galaxy S device. The Samsung Epic 4G features the same 4-inch touchscreen, Samsung Hummingbird processor, and 5-megapixel camera with 720p HD video recording as the other Galaxy S phones (this version also includes the VGA front-facing camera, a feature that has quickly become a huge fan favorite).

The big kicker here is that the device will come with 4G radios to work with Sprint’s growing 4G network, as well as the fact that it will have a slide-out QWERTY keyboard (pretty much what we’ve been referring to as the Samsung Galaxy S Pro).

The device will launch with Android 2.1 and TouchWiz 3.0, but Samsung and Sprint have stressed that they’ll be working very hard to get this thing upgraded to Android 2.2 “in the near future”. Other specs include 1GB of ROM, 512MB of RAM, a 1500mAh battery, and will ship with a 16GB microSD card (expandable up to 32GB). All of the other connectivity options you’d expect to find in a Galaxy S phone are all included alongside the added 4G. 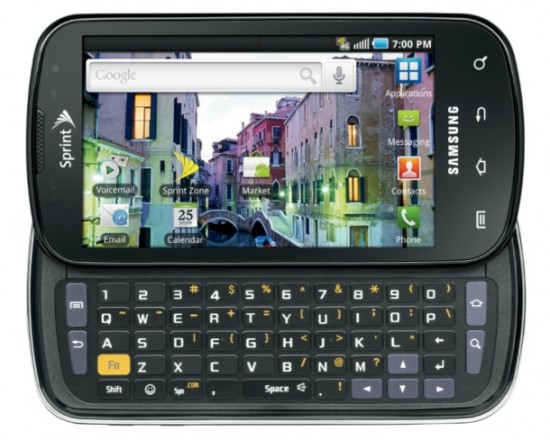 There are no details regarding pricing and availability just yet (outside of the same $10 fee that’s been haunting the monthly bills of current HTC EVO 4G owners), but we expect we’ll hear all about that sometime soon. Real soon. Full press details straight ahead.

OVERLAND PARK, Kan. – June 28, 2010 – Sprint (NYSE: S) and Samsung Telecommunications America (Samsung Mobile), the No. 1 mobile phone provider in the U.S.1, today introduced the second 4G-capable handset from Sprint, Samsung Epic™ 4G, a Galaxy S™ smartphone and Samsung Mobile’s first 4G Android™-powered device.
l
“Sprint takes another leap forward today, announcing its second 4G-capable smartphone,” said Steve Elfman, president, Network Operations and Wholesale. “Samsung Epic 4G joins a portfolio of powerful devices offering an unprecedented simplicity and value to our customers as the only national carrier with a 4G network and devices and applications that can leverage the increased data speeds to provide a high-def entertainment and business experience in the palm of your hand.”

Samsung Epic 4G is part of a new breed of Samsung smartphones offering their very best in screen, speed and content quality for a premium user experience, and offers a fully integrated multimedia, messaging and social networking experience. It also features an exceptionally thin smartphone design with a slide out, full QWERTY keyboard and 4-inch Super AMOLED touchscreen display.

Entertainment at Its Best
In the coming months, Samsung Epic 4G will have access to the Samsung Media Hub, making it the first and only 4G handset to feature a video store with movies and TV available for purchase or rental, and video content set up for an HD-like entertainment experience on a handset screen. With 4G from Sprint, users will be able to get turbo-charged downloads of a full library of video and literary content powered by some of the biggest names in entertainment.

Samsung Epic 4G also features Samsung’s exclusive AllShare service to wirelessly share stored music, pictures and HD video to other DLNA (Digital Living Network Alliance) certified™ home electronics, including HDTVs, monitors, digital cameras, printers and more. Through AllShare, users will be able to capture moments with the phone’s camera and camcorder, and wirelessly show them to friends or family on their DLNA certified HDTV or download music from a PC to Samsung Epic 4G and take on the road.

Samsung Epic 4G is the only 4G smartphone to offer three fast and easy ways to enter text onto the device – a slide-out full QWERTY keyboard, virtual keyboard and Swype technology, which allows users to input text faster and more intuitively with one continuous finger motion across the virtual keyboard.

The smartphone is designed for an optimal gaming experience with a six-axis sensor that fine tunes its accelerometer’s ability to interpret simple movements of the device, so when the phone tilts up and down or left and right, the game can immediately respond in the same directions. A demo of Asphalt 5, a popular racing game, is preloaded exclusively on Samsung Epic 4G allowing users to take full advantage of these advanced gaming capabilities.

Game-changer for Business Customers
Samsung Epic 4G is designed to deliver one of the best multi-media experience for business users in several vertical industries such as healthcare, education, public safety, construction and professional services through superior speed and display innovation. It offers support for push email and integrated calendar services, including Google™ and Yahoo, as well as Exchange ActiveSync for corporate email including enhanced device management and security features, as well as full support for Google Mobile Services.

With Android’s open-software platform, businesses can benefit from several productivity-enhancing applications available in the Android Market™ including bar code scanning, signature capture, document viewing and the ability to stream and upload video for customer approval and archival purposes.

As work on finalizing the software is underway, Sprint expects to launch Android 2.2 for Samsung Epic 4G in the near future. With the Android 2.2 upgrade, customers can expect improvements to include the following benefits among others: updates to User Interface, improved EAS Support, improved Browser Performance including Flash 10x Support, voice Dialing Over Bluetooth and application Storage on External Memory.

A Sprint 4G developer guide is available today from the Sprint ADP Web site at http://developer.sprint.com. The Sprint 4G developer guide provides details on developing for an Android 2.1 handset and how to take advantage of the Samsung Epic 4G’s unique hardware and software capabilities and the Sprint 4G network. The Sprint Application Developer Program has been providing tools for third-party developers since Sprint first launched the Wireless Web on its phones in 2001.

Sprint will announce pricing and availability in the coming months; meanwhile customers can pre-register for more information about Samsung Epic 4G at www.sprint.com/epic4g.

As the first national wireless carrier to test, launch and market 4G technology, Sprint made history by launching 4G in Baltimore in September 2008.

More Satisfied Than Ever
Powerful 4G smartphones like Samsung Epic 4G is one of many reasons Sprint is the most improved company in customer satisfaction, across all industries, over the last two years, according to results from the 2010 American Customer Satisfaction Index.

Sprint’s improvement was driven in part by substantial gains in two aspects of the survey. In the area of customers’ perceptions of value, Sprint now leads both AT&T and Verizon. The company also achieved an impressive improvement in the area of customer loyalty. With these gains, the company’s overall ACSI score jumped 14 points over the last two years. In the last six years of the ACSI survey, no other company has improved its satisfaction score by that many points in a two-year period.

The improvements in the ACSI survey come as Sprint has seen nine consecutive quarters of improved customer satisfaction and first call resolution. The company’s improvements have also been recognized by other independent third-parties, including Sprint winning the #1 spot for both overall satisfaction for wireless voice service providers and wireless data service providers in a Yankee Group and Mobile Enterprise magazine survey of large business decision makers. Sprint also ranked high in small and medium business customer satisfaction. Also noteworthy was Sprint’s two-year Reputation Pulse™ score increase in Reputation Institute’s 2010 U.S. Most Reputable Companies Study (published annually in Forbes). Sprint’s 18.22 percent gain puts its improvement in the top 10 percent of the 150 largest U.S. companies, ahead of both AT&T and Verizon.

About Sprint Nextel
Sprint Nextel offers a comprehensive range of wireless and wireline communications services bringing the freedom of mobility to consumers, businesses and government users. Sprint Nextel served more than 48 million customers at the end of the first quarter of 2010 and is widely recognized for developing, engineering and deploying innovative technologies, and is the first and only wireless 4G service from a national carrier in the United States; offering industry-leading mobile data services, leading prepaid brands including Virgin Mobile USA, Boost Mobile, Common Cents Mobile and Assurance Wireless and instant national and international push-to-talk capabilities; and a global Tier 1 Internet backbone. With its customer-focused strategy, you can learn more and visit Sprint at www.sprint.com or www.facebook.com/sprint and www.twitter.com/sprint.