What do you get when you combine Barcode Scanner by ZXing Barcode, Google Goggles and the “Shopping Tab” on Google.com? The Google Shopping Android Application which just launched on Android Market! I quickly downloaded the app and gave it a quick spin in this on-the-fly hands-on review; I literally had downloaded the application 5 minutes before.

A more concise overview/explanation video of Google Shopper was published by Google and you can watch below. They pretty much summarize my 8-minute video in less than 1.5 minutes, produced in much better quality but without hinting at any application imperfections. Heck – it’s the promotional video:

I totally agree with some commenters/reviewers that Google Shopper overlaps with Google Goggles and this is a challenge Google will continue to face. They’ve also got technologies headbutting with GMail, Google Voice, Google Buzz and Google Wave – that’s 4 different inboxes and accounts they’re asking you check on a daily basis. As they continue their attempt to provide more and better services, this problem will grow.

The solution isn’t as easy as you think. Sure… they could start combining applications, merging them together and allowing you to make your various selections in the app, but as the app grows in complexity you may end up resorting to a simpler application that just does the singular thing you need most (and do/does it/them well).

I was also surprised that (in my first test) Google Shopper:

I’m not sure how Google Shopper compares to other shopping apps like Shop Savvy and Amazon’s own native Android Application, but I’ll at least be using Google Shopper for a week or two to test it out. I love the simplicity, the UI, the improved scanning functions that seem to be ported over from Google Goggles, and perhaps most of all the ability to easily view search history and make a list using “stars”.

I’m guessing that Google plans on syncing your mobile “Shopping List” with your Google.com account shopping list on your desktop. However, 20 minutes after I starred a few items I still didn’t see anything in my desktop list:

I’m sure Google will make improvements to the application over time and I’m excited to see where they bring Google Shopper. And perhaps more curiously, how they incorporate Google Goggles and all their other products into a suite of apps that don’t step on eachothers feet. I guess when it comes down to it… there is nothing wrong with offering users apps that overlap – the important thing is they have a great selection of awesome apps that serve a wide range of purposes. 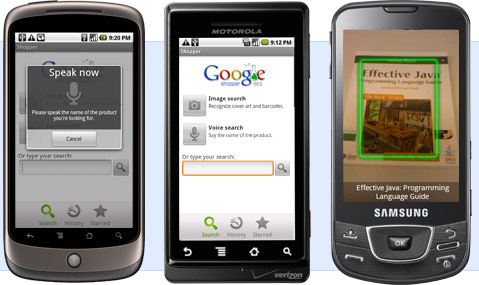 You can download Google Shopper on any Android Phone through Android Market.