A little birdie named tnkgrl has been tweeting her heat out about the Nexus One which she has been playing with and apparently all the attention led to a full blown post on her blog. In the post she provides a bunch of bullet points on her overall impressions of the device and they sound pretty promising – except for the lack of multitouch support:

– It’s extremely thin
– It’s much nicer looking in person than in pictures
– There’s a 4 GB micro-SD card installed
– The battery capacity is 1400 mAh
– The screen appears to be OLED (same size/resolution as the Motorola Droid)
– 3G works on T-Mobile USA :)
– I can confirm that there’s no 3G on AT&T (EGDE only)
– It’s definitely unlocked
– It’s super snappy! Faster than the Droid…
– There’s no multitouch support in the browser or in Google Maps
– There’s no dedicated camera key, but it’s the same camera interface as the Droid
– The trackball can be used to focus (like on other HTC devices)
– Low-light performance is decent, but the flash is weak
– Calls are routed the normal way, not using data (VoIP), and sound fine
– The home screen is divided into 5 panes (like the Sense interface on the HTC Hero)
– It’s using a micro-USB connector for data/power
– There are some gold contacts at the bottom edge, for a dock perhaps?
– Did I mention it’s fast?

I really wish that someone would just come out and identify – once and for all – the core reasoning behind lack of multi-touch on Android phones in the United States. The Palm Pre has multi-touch. The Hero has multi-touch. Heck the Motorola Droid and other Android devices have multi-touch capabilities… just no multi-touch in the operating system functions and core Google apps.

I understand its a licensing issue of some sort but then how/why can application makers like Picsay include it at will? I wish we could pin someone down for a specific reasoning and hopefully hear if and when this will all be resolved. Either that or hook the world up with a non pinch and zoom solution (zoom wheel anyone?).

I’m excited about the mentions of “speed” and also about how this device looks in person, which tnkgirl tweeted:

At this point I realized I’ve been calling “tnkgrl” a “she” even though I have no clue if that is the case. I assumed because of the “grl” but… how about the avatar? Then I checked out the blog about page and saw this picture with the following description: 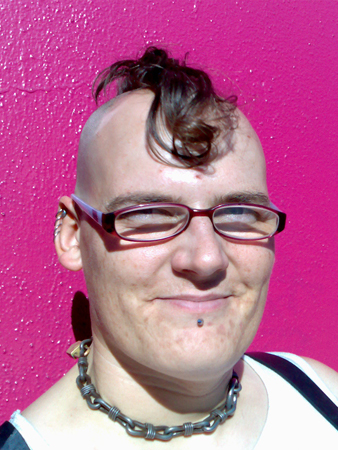 tnkgrl was born wearing combat boots and holding a keyboard – 5 minutes later she picked up a soldering iron…  She’s been stomping, typing and hacking ever since! She’s a video game code-monkey by day, a pirate-freak by night.  One day she decided to share her experiences and thoughts on mobile technology, and so this blog, tnkgrl Mobile, was born. She’s a butchy dyke with a fondness for other queers, punks, nerds, and misbegotten social deviants.

This chick was badass BEFORE she had the Nexus One… now she’s like… badass to the assbad power or, uh.. something. Plus she knows her stuff – great blog. Props to tnkgrl and hopefully we’ll hear more from her in the future – thanks for all the insight!

[Thanks to all who sent this in]