The myth is become a legend and the legend is making its way into the hands of Google employees. That’s right ladies and gentlemen, tweets and other messages from around the interwebz are claiming that the fabled Google Phone is being given to a large number of Google employees to test out. The overwhelming conclusion? Forget every other phone ever existed.

Here are some n0table people from around the interwebz who are tweeting about their new experience with THE Google Phone.

Name: Leslie Hawthorn
Position: Program Manager for Google’s Open Source Team
Website: HawthorneLandings.org
Comment: “Stuck in mass of traffic leaving work post last all hands of 2009. ZOMG we had fireworks and we all got the new Google phone. It’s beautiful” 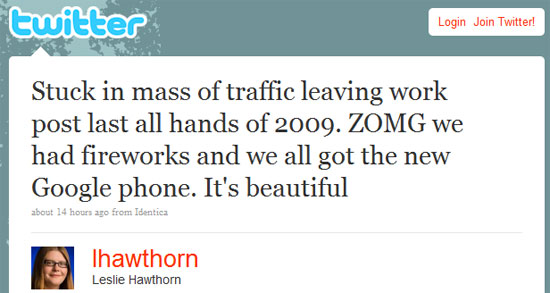 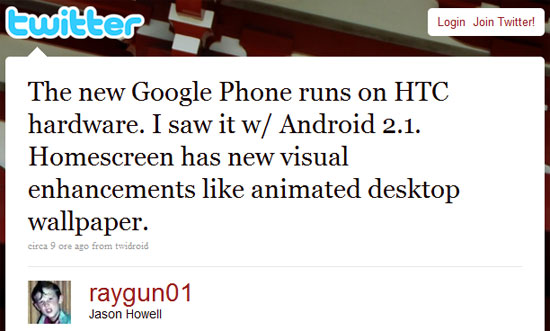 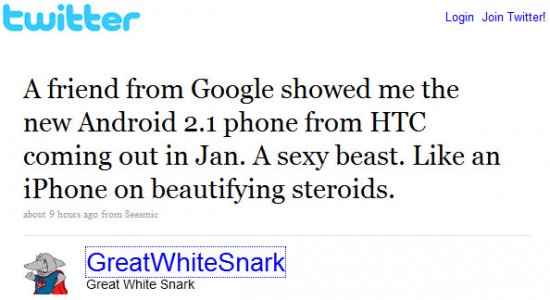 In the comments of the TechCrunch article you can find the Great White Snark saying the following:

Yeah, it’s a hot, sexy mess. And I mean that in a good way. Similar form-factor to the iPhone, but with a smooth-brushed-metal-looking shell instead of a glossy one. And perhaps a smidgen lighter.

Super fast, speech-to-text in EVERY app, awesome “live wallpapers” in the background that respond to touch in really beautiful ways. Like water ripples that emanate out from a touch.

I’m really, really, REALLY looking forward to speech-to-text in EVERY app. Especially composing text messages and emails using my voice. If you scroll even further down the article you see a response from Jason Howell, the second individual highlighted tweeting above. He continues:

I was given the phone for a very limited time from a Google employee. It resembled an HTC Hero to my eyes, though a tiny bit smaller and DEFINITELY thinner. I kept looking over at the guy using it, thinking to myself that it WAS a Hero, but when I asked, he spilled the beans. Google employees were handed the phones today. He reiterated that there would probably be a decent amount of information hitting the tubes this weekend. With my limited time with the device, I saw it running Android 2.1. The home screen had this animated background image that looked nifty with red and blue lasers shooting across it. The gray bar at the bottom of the home screen was replaced with the “house” line art used on the face of most Android phones that takes you to the home screen. Looked sleeker. Super light phone too.

This phone was unlocked, though the guy had thrown an AT&T sim card into it.

That’s about all I was able to glean in my minute’s worth of dabbling. It was sleek and nice looking, but I am scratching my head trying to figure out what the real difference is between this and any of the newer HTC Android phones. Scanning the apps, I didn’t see anything that really stood out as different from what I have on my Droid. And being that it was Android 2.1, the only really differences I saw were a few visual ones. So it doesn’t appear (in its current state) to really be offering “the *real* Android” experience that’s mind blowingly different from what’s out there so far. Maybe I just didn’t dig deep enough to find it though.

Sorry I couldn’t snap a photo.

Now THAT isn’t too promising. Smaller than the Hero? There are people who think the Hero is too small seeing as how it doesn’t have a physical QWERTY keyboard. Of course Google could be going for the “super cheap with no need for a contract” angle. Can you imagine a $100 Android phone with absolutely no contract like our friend Charbax suggests?

A necessary comment to point out in all this is one made by “Jack Ratio” who, like me, suggests many people still haven’t made the distinguishing difference between an “Android Phone” and “The Google Phone” and are perhaps confusing them:

The googler wrote:
“…and we all got the *new* Google phone. It’s beautiful.”

“The *new* google phone” as oppose to “The Google Phone”.

For 2 of those 3 to confuse them I would understand, but 1 of those 3 is a Product Manager at Google and you would THINK they have their lingo down to a science. This is sounding really, really good but as always… serve with healthy dose of salt (as if there was such a thing).

Oh yeah… this thing came unlocked but those seeing/using it were reporting they stuck an AT&T SIM card in it which worked beautifully. So all you AT&T customers wondering why the heck the company hasn’t yet released an Android Phone? Maybe this is why…