Phones are the Face of the Carrier 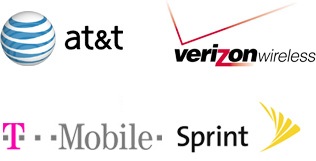 There was a time when mobile carriers would try to distinguish themselves based on the service they provided and their pricing plans.

“The times are a-changin’,” and ever since the iPhone, mobile carriers have tried to make phones the face of their company.

When most people think of the iPhone they also think of AT&T. The iPhone and its marketing revolutionized the mobile phone industry. Not only did they make an appealing product, but Apple made AT&T part of its brand in a way.

Majority if not all of the iPhone commercials seem to come from Apple. Not only until the end of the commercial do we see or hear about AT&T and their “On the fastest 3G network” slogan.
Though AT&T does have it’s “More Bars” and “Rollover Minutes” commercials they are not as prominent on the air waves.

The venture between these two has merged the Professional with the teen market to create one product that is cool, professional and efficient. Something that was missing, since BlackBerries were not sexy and SideKicks are too teenybopper.

However, come Q1 2010 Dell’s 3iX, which runs Android, will hit AT&T’s stores. It should be interesting to see how AT&T decides to approach and promote the phone and OS.


T-Mobile was synonymous with Android for a while. Ever since the G1, Android fans embraced T-Mobile and Google’s open source policy. However, T-Mobile did not really make the G1 its face. Instead, they waited until the myTouch 3G to come out this past summer.

They then rolled out the CLIQ and re-invented their pricing plans to be about half off AT&T’s and Verizon’s pricing plans. Oddly enough, T-Mobile hasn’t really made a big promotional push with their new pricing plans.

Sure they rehired Catherine Zeta-Hotness to be the face of T-Mobile once again, and got Oprah and the Black Eyed Peas to make a 1 hour Oprah episode to push mytouch 3G, but they haven’t made their new pricing plans stand out. In fact, they have only released one commercial explaining their new pricing plans and another one saying they are cheaper than the rest.

Instead, their push for Android has gone as far as creating brochures displaying Android based phones and Top Ten paid and free apps. 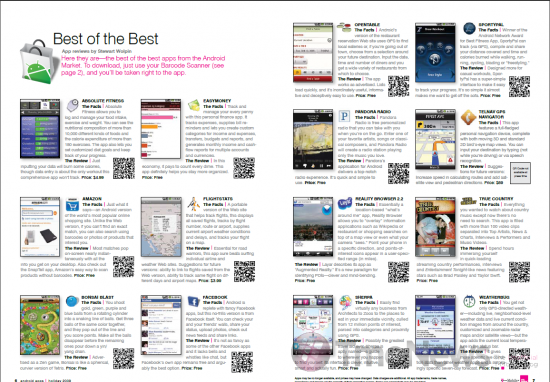 These pics were taken from TMonews 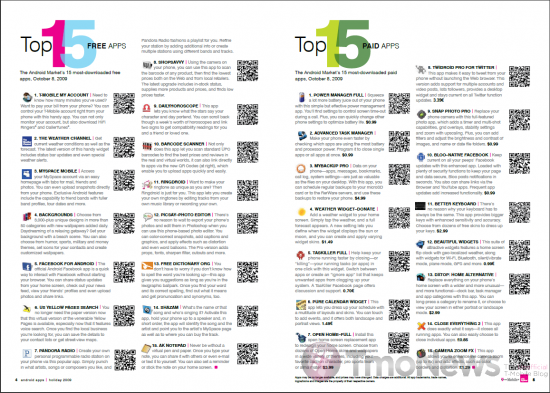 In Europe they have these sing along commercials.

Why not walk around with the Promo phones and have people call their friends off the T-Mobile network. Change the slogan to “connecting people” or something along those lines. Something that shows off the phone, their network and people getting together having a good time.

In an attempt to take down the iPhone, Verizon has decided to ridicule its carrier, AT&T and Apple.

Verizon is known for expensive plans and the “Can you hear me now?” commercials, but as of late the word Droid has become synonymous with Motorola and Verizon.

Many customers have complained about Verizon’s lack of “cool” phones and the way they handicap their phones by making you pay extra for features others get free.

However, with two Android based system, the Gestapo-like carrier is taking a big step in letting the Motorola DROID define Verizon as a carrier.

Not to mention their push behind the Open Hand Alliance (OHA).

Before the Droid, the most exciting phone in their line up was the HTC Touch Pro 2. A phone that every carrier has. But with Droid, Verizon has the most advanced released Android phone to date.

It’s running Android 2.0. -First.
ARM Cortex 550MHz processor – The most powerful cpu with Android.
3.7″ touch screen. – The largest screen on any Android.
5MP camera with dual LED flash – Best flash of any android.
Google free turn by turn navigation. -First.
And the most 3G coverage in the states.

Based on reviews the Droid is comparable if not more capable than the iPhone. It has all the features except the multitouch function, which is disabled for some daft reason. 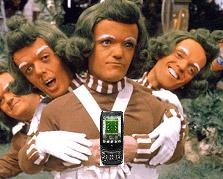 Oh Sprint! One of those Goodbye Songs should be written about half of your advertising/marketing department. Though I must confess to liking their Now Network commercials, the lack of “A” product has really back fired on Sprint. The CDMA carrier had pent up all of its pennies on the Palm Pre and its Oompa Loompa sized keyboard. However, expected numbers for Pre sales are said to be less than stellar. Not to mention that Sprint has lost over 50,000 customers in the last year.

Currently, Sprint has two Android based phones, the Sprint Hero and Samsung Moment. None of which Sprint has done commercials for or any type of real advertising. Well, unless you count a press release and this yet to be aired commercial.

The Sprint Hero is one of the best selling phones and was the most talked about Android Phone for a better half of the year.

I can see how low sales on the Pre can make a struggling company think twice about associating itself with a product, but don’t handicap your product by just letting word of mouth be your advertising.

The phone has gathered great reviews. Reviewers have generally praised the Sense UI and the phone’s solid build. Why not jump on your own phone’s bandwagon? Don’t just sell it short by stating the Hero has “a thousand of apps” and that it’s “customizable.” The phone does what the Pre does with less horsepower and more apps.

Call it vanity or excitement, but carriers are realizing that people will pay a ridiculous amount of money for a phone they like. They’ll even pay a $200 early termination fee from one carrier to pay $200 more on a new phone and a more expensive plan.

It seems the light calling the mosquitoes is not the features a carrier provides, but rather how “cool” a phone is represents how profitable a carrier will become.

Writers update:
1. Clearing up the multi-touch statement above. Though the phone itself does allow for multi-touch to be used through 3rd party apps, Google has not integrated the multi-touch functions into their browser and Google like products.