When bored and having nothing to do, what do I do? Go to Best Buy of course. I went Saturday to pick up an Archos 5 Android Tablet. I was prepared to return it within 14 days and I just didn’t believe a tablet PC would deliver the user experience I need. I don’t think it’s going back.

I bought the $299 16 GB solid state version. After recently losing a laptop Hard Disk Drive while flying (knuckle headed security person dropped my laptop bag from about 2 feet throwing it on the belt to re-screen it), I don’t know that I would get a HDD for such a portable and pocketable device. If truly carrying it with yourself like a cell phone, you might be asking for troubles later getting a HDD. 16 GB running on Linux is fine for me. Linux unlike windows can have full memory capacity and run just fine. There is an expansion micro SD card slot as well on the 16GB and 32GB models. With a 16 GB micro SD card (32 GB cards due out soon) that gives 32 GB total. That is plenty of storage for my intended use. For example, I put the last Die Hard movie on the Archos 5 and that was just over 2GB. 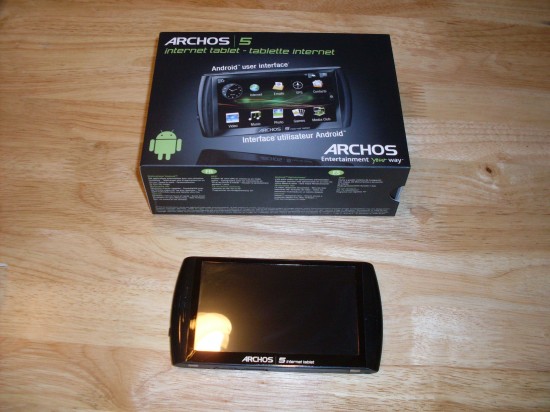 It truly is pocketable because it’s thin. The Archos5 is roughly the thickness of a G1 keyboard. The larger HDD versions, actually add considerable thickness to the device, all most doubling its thickness. They didn’t have one out at Best Buy for comparison. My sense is that it would no longer be pocketable in jeans. This version fit in my jeans pocket, albeit comfortably snug. Definitely works with slacks and other types of pockets. The Archos 5 has an overall great feel and build quality. It also sports one of the best kick stands I have seen on any device for table top viewing. Some devices are finger print magnets. This device must be a finger print “magnifier”. The clear plastic accent pieces that surround the screen and cover the back, show fingerprints terribly, even more so than the high gloss black plastic. I hate to use the word sexy to describe a device. My female neighbor, I kid you not, upon first look at the device exclaimed, “That’s sexy.”

It runs an Archos version of Android. This is significant for several reasons. There is no Google integration. None, nada, zip, zero, nunca. The only integration you get is going into your Google account in the very nice webkit browser. I didn’t have any issues because the browser is nice with nearly 5″ of screen, but if you are a fan of the Google Android OS apps like Gmail, Gtalk, or Calendar, be warned. This also represents one of my largest issues with the Archos 5. They have their own app market, AppsLib. Now I understand that this is needed because the regular versions of apps from the Google Android market are not formatted to run properly on a tablet. However, this translates to issues for the user. For instance, Archos 5 comes preinstalled with Twidroid. Great! I love Twidroid. In fact, I love it so much, I bought the Pro version in the Android Market. The lack of Google integration means that that app is not available to me in the  ARCHOS 5 AndAppStore and even if it was, AndAppStore does not recognize previously purchased apps. Meaning that the user must repurchase any pay apps he or she wants on the Archos 5.

The Archos 5 Android OS is based on Android 1.5. So you get all the foibles of this version of Android. For instance, Archos 5 has a terrible email app that can’t delete trash. As with early Android, these issues can be overcome with apps from the market, like K-9 mail. Although it’s maddening by how terrible the native AppsLib and alternative store AndAppStore is. AppsLib was completely unusable and AndAppStore is challenging to use. In their defense, they have just begun to develop this system and my Archos 5 did have an update as soon it was powered on. So they are continuing to develop their OS and app store. The ARM Cortex-A8 processor in the Archos 5 should sound familiar. It is the same type of processor found in the Verizon Droid and iPhone. It pushes the OS along very nicely indeed with an additional 32 bit DSP @ 430 MHz processor. 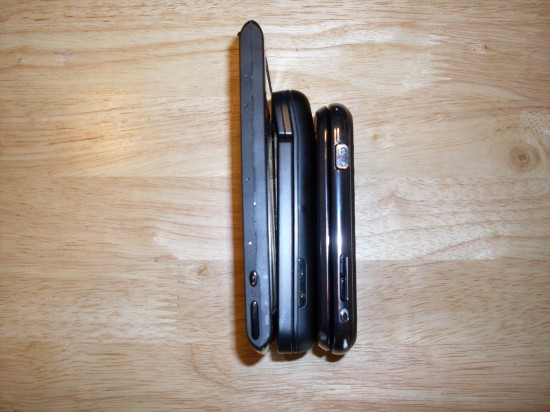 The Archos 5 does have HD support, meaning it can render video at 720p. The screen is large, bright, and clear. Archos have created their own Archos 5 Media Center app that plays videos very well indeed. This was a downfall of Android and Archos has addressed the issue nicely. The resistive screen takes some getting used to. I think I have been spoiled by excellent capacitive screens on HTC and Motorola devices. However, after some get-to-know-me time, it’s very usable. Only one caveat, in the four corners of the screen, you must use some force to actuate the screen. Most likely because the resistive screen is supported on two sides near these points.     The use of this device is totally un-Smartphone like. The amount of real estate on the* *4.8″ screen renders full web pages and makes using the browser a joy. The screen size also allows for an excellent virtual keyboard experience. The key sizes in both portrait and landscape are excellent and my pudgy digits make very few mistakes. In fact, I can type so fast that the lack of multi-touch is noticeably slowing me down. There is no comparison that is valid to any Smartphone touch screen on the market just because of sheer size. In this case, size does matter.

One of my all time biggest pet peeves is purchasing expensive items and then being forced to purchase additional items. The Archos 5 does not come with an AC adapter for wall charging. It comes with a USB to proprietary mini USB for charging. I really do see this as an alternative to my Netbook. However, you are still tied to a computer out of the box. Not to mention that a quick search revealed $50 for a battery docking station from Amazon. No small chunk of change. If I keep the Archos, I would most certainly want an AC adapter for that additional freedom. However, it is interesting to note that battery time is excellent. I banged away on the Archos 5 for almost 11 and a half hours before I had to charge it. I don’t know of any situation that I would be using the Archos 5 that hardcore for that long. Maybe the next time I would go across the pond, but even that is about 9 and a half hours. On the downside, it does take roughly 7 to 8 hours to fully charge. However, charging times would improve with an AC adapter.

As this is just first impressions, there are still things I have yet to do with the Archos 5. It comes with a 7 day trial of a turn by turn 3D GPS. Will it work going 70 mph down the highway and not miss an exit? I haven’t attached the Archos 5 to my DVR or Flat Screen yet via HDMI. I will get into more detail later. It is interesting to note that the Archos 5 does have a microphone and speaker, making VoIP totally possible. In fact it’s been noted by others that you can. I just can’t seem to find the app that makes this a reality. Lending more proof of the challenges users face with the AndAppStore. I took Chicago Sun-Times writer Andy Ihnatko’s advice regarding the Archos app store. On A Fox News tech segment, he basically said it was much easier to Google search for Archos 5 apps and download them from developers pages, than to work with the Archos 5’s app store. He is very correct on this point. 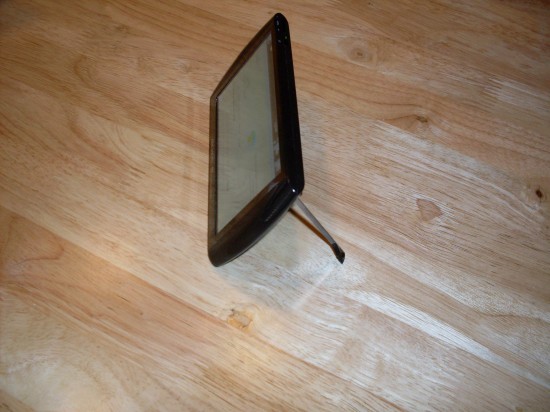 Can I do everything on the Archos 5 that I purchased my Netbook for? The answer is a resounding yes. I can message, use social media, email, and keep track of news feeds. When I first heard of Android being used on a netbook in a traditional computing sense, I was and am undecided as to how well that would translate to a quality user experience. Android on the Archos 5 tablet PC has opened my eyes and made a compelling argument for Android running on another platform besides cellular phones, in fact, a compelling argument for the entire concept of the tablet PC. I really do believe after my short time with the Archos 5, that some Netbook buyers would be perfectly happy with a Tablet PC alternative.

The ongoing joke this weekend with my neighbor was that my Netbook was using its power chord to make a noose for the Archos 5. Reality is that normally I will take my netbook upstairs to bed and wind down for the night doing some messaging or emails. My Asus Eee PC 1000 spent the whole weekend gathering dust by itself in the cold, dark corner of the kitchen.

Update: I originally had stated that AndAppStore was the native App Store for the Archos 5. KBlack correctly pointed out that that was incorrect. AppsLib is the native App Store.  However, from the start, I couldn’t download one app from AppsLib and had to search out an alternative. I have revised the post to reflect this. Thanks KBlack.

Archos 7 Tablet Wants Some Love Too