Android 2.1 So Far – What We Know Already

It astounds us to know that Android 2.0 has only JUST BARELY launched-ish and already we’re getting info about 2.1 Features, removed “features”, and bug fixes. Fortunately for you we just can’t keep it in any longer.  It’s time to share with my Phandroid friends all the juicy details we’re holding within!

.. Bah, I’m just playin’. On the for serious guys – we know nothing. But, we DID see this article earlier today thanks to one of our readers.  It would appear they’ve started to notice some traces of 2.1 in their logs: 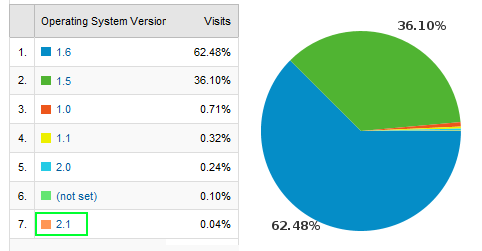 ..and wouldn’t you know it – so are we.  AndroidandMe reports it to be “a minor update that will be released towards the end of 2009. It will focus on bug fixes for Android 2.0.”

Wonder what these exactly these bugs could be? Either way, good to know they’re already getting a patch/update prepared.

So to our readers – I propose this. A little something for you to do while you await your phones or the next Phandroid article. Comment on 2.1 if you like, but while you’re at it tell us what it is you think Android is missing, or what you think could be done better, or done without? Sure, you’re not 100% up to speed on 2.0 but you’ve probably seen enough reviews and videos to know a few of the things that have changed as well as a few of the things that haven’t.  What do you want to see, or not see, in the next big release.

I know it’s a little early but – why not? Perhaps if we get enough good replies we’ll make a poll with all the top suggestions and see where it goes. Heck, maybe someone out there will be listening – so let’s hear it!