Michael Arrington from TechCrunch has somehow gotten ahold of the T-Mobile MyTouch 3G Commercial that he says will begin airing in the United States today. I found it funny that Arrington reiterates his rebelious tech blogger image saying, “I’ve uploaded to YouTube without any permission whatsoever”. The commercial features Whoopi Goldberg, Phil Jackson and Jesse James and well… watch it below (Thanks Mike!):


I think its a great “lifestyle” commercial which is exactly how T-Mobile is positioning the phone and the name – MyTouch- goes right along with that. I like the fact that they use celebrities but don’t shove the endorsement down your throat. It gives the impression/idea that celebs are regular people with regular phones/things too… and they’re using the MyTouch.

When you visit the MyTouch Microsite things are a little bit different though. The endorsed quotes seem contrived and forced and I think they detract from the true emotion that the phone is really the celeb’s phone. Here are the quotes they attribute to each of the 3 celebrities: 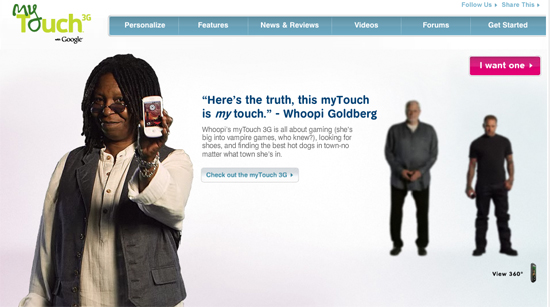 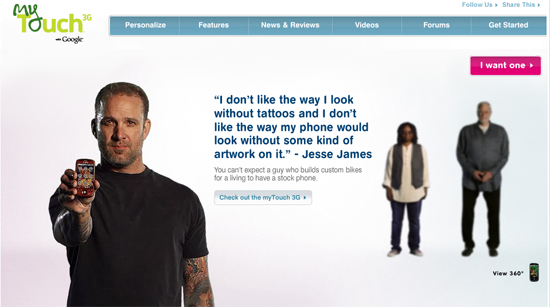 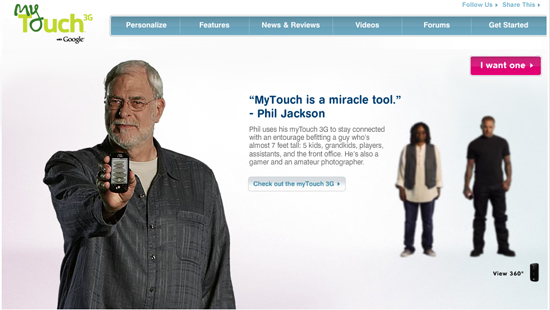 I would be curious to learn how much these celebrity endorsements cost and what other celebrities are in the same price range for a project of this magnitude. Seems like a pretty random selection and I understand that’s partially the point but the collection lacks a certain sizzle if you ask me.

I have another complaint about sizzle too… and its all about the timing. Why didn’t T-Mobile launch this campgain immediately after the phone was announced/launched? With Motorola’s September 10th event scheduled, a lot of people who WOULD have been convinced a month ago will now probably play “wait and see” to hear what Motorola has on tap.

Hopefully Motorola will be announcing the Morrison for T-Mobile in addition to the Sholes for Verizon. But now I’m not so sure they will… Arrington quotes an unsourced person – probably a T-Mobile rep – as saying it will be “the largest product launch advertising campaign in T-Mobile history.” That would seem like odd timing only a couple weeks before a better spec’d phone is poised to be announced for the same carrier… no?

If you watch the 4th video from our MyTouch Launch Event Video Post you’ll hear them discuss the upcoming commercial campaign. Fast forward to about 2 minutes in when VP of Marketing Denny Marie poses the question “Well how are we going to bring this to market” to herself. Keep in mind this was in early July:


Actually, it sounds like from the getgo they didn’t plan on launching this until mid to late August. She notes that initially they would make it available to existing customers, then they would rely on word of mouth and through summer they would count on their value proposition of offering the best service, phones and coverage of all the carriers out there.

And then the bit about the ad campaign:

“But there are some folks seeking devices, not just the best value in wireless, so its important for us to get out there and create awareness around the MyTouch very quickly. Beginning in Mid-August you’ll see us put a great deal of effort behind the 100% You Campaign. Um, I’m not going to share details with you of all of it today, but we will do that over the next weeks as we get closer and closer to the actual advertising launch day. I can assure you however that 100% You is what we’ll be talking about, how it becomes you inside and out, and we’ll be using the opportunity to take some notables and share with you- you might think you understand them and know who they are, but you really discover how they’ve personalized their phones exactly, what their passions are and what’s most important to them.

So it’s going to be an interesting opportunity with television, print and a heavy presence online for people to really come in and discover how some of the people they know and think they know have personlized their myTouch phones. So look forward to that, we’re excited about the marketing but most importantly we’re excited about how we know people will be out there advocating the phone. People who have already experienced it…”

No mention of the largest roll out in the history of the universe or anything, but it certainly provides some insight into this whole campaign. And to think we should have known this over a month ago if we had all just listened a little more closely.

Me included. Android enthusiasts have been commenting on Phandroid for the past month wondering and questioning why T-Mobile wasn’t advertising the myTouch 3G at ALL! Now we know that they never planned on beginning the promotional push until mid-August. Why that is? What strategy is at work there? What they know that we don’t?

Anybodies guess. I just hope the timing of this huge marketing push doesn’t imply that T-Mobile won’t be one of the carriers getting a MotoDroid due for September 10th announcement.