Kogan Agora Is No Mora 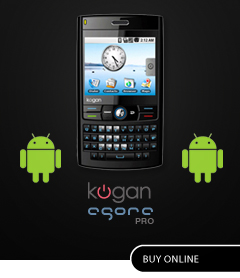 Kogan founder Ruslan Kogan had this to say about the world’s hopeful but canceled 2nd Android Phone, “Since the design of the Agora, the Android community has been growing quickly. I now believe that in order to access all (that) the Android platform has to offer, the Agora must be redesigned.”

And so the Kogan Agora and Kogan Agora Pro are no longer – discontinued indefinitely. Perhaps when they are redesigned they will resurface with the same name as they say the will “continue to blog about the Agora” and in coming months they will “release a new version of the Agora”. But when Kogan does announce a brand new Android Phone… how many people are going to take them seriously?

The Agora was actually a pretty nice looking handset but apparently its low resolution screen was the reason for its cancellation. The company’s founder felt the specificiations would limit its compatibilty in the future to the point of what the company calls “potential interoperability”. Developers will be making higher resolution apps for which the Agora would not be able to display and Kogan should at least get Kudos for not selling a hyped product that would become a brick in a few months.

I am sorry for this delay, but in the interest of doing things right by the Kogan brand promise, and you, the customers, I cannot disappoint you by supplying a product that I am aware will shortly have significant limitations.

Kogan had already been accepting pre-orders of the Agora and Agora Pro and the company said they will refund all of that money in full. Its a sad day for Android Phones in Australia and really, around the world. What could have been the 2nd generally accepted Android Phone has now reached a premature death and some would even say, was the victim of a miscarriage.

Mobile phones obviously aren’t Kogan’s strong suit. They are an established company, though and you have to wonder what factors went into cancelling the phone. Is manufacturing for Android really as difficult as the likes of Sony Ericsson, LG, Samsung, Motorola and others are making it seem via the long wait? Or does Kogan know something that we don’t, not wanting their device to be quickly surpassed and then undersold, not meeting sales expecations?

So there you have it… you can stop waiting for the Kogan Agora and Kogan Agora Pro to launch.

Kogan Getting Back On Track