We just spotted the news that MTVMusic.com has launched and if you’re a music fan (and non-athiest) you can start praising the lord(s) right now because its one of the most amazing websites on the face of the earth. 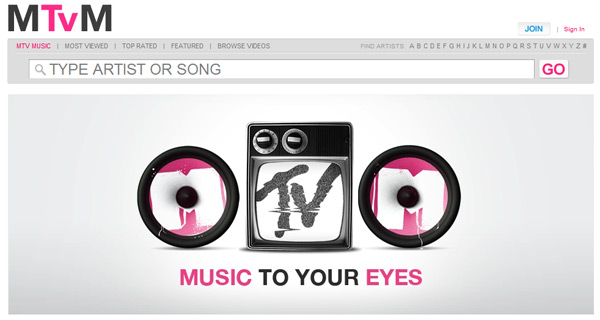 The website catalogs pretty much every video ever created and organizes it in a tremendously easy to use fashion. The site also includes videos of live performances and events that might not be included elsewhere such as concerts, MTV Unplugged, etc… and… you can embed them on websites. I’ve embedded 4 songs at the bottom of this post and you can see the quality rocks.

Unfortunately, visiting MTVMusic.com from your G1 will produce virtually NO results. MTV Music clearly needs an Android Application for it. This post could be considered somewhat off-topic but I couldn’t help it… I WANT THIS ON MY G1!

Speaking of which… uhoh to all the Music Video applications on Android using YouTube if that happens. Looks like Tunewiki might need an update to work with MTV Music!


And yes… I love all 4 of these songs. I love all kinds of music and all genres.

Props to Gizmodo, where I initially learned of the news. Writer Adam Frucci provides a great analogy: “It’s like Hulu for music videos, only with less ads (for now).”

Okay, okay… so not EVERY video ever created is on here. We just tried to find “Low” by Cracker and no videos by that late 90s group were available. But you can better your bottom dollar that they SHOULD have that song… it rocks.