Business Week has published more details about the upcoming Social Based Motorola Android Phone that has been making the news rounds the past few days. We already knew Motorola was hiring an additional 350 people to work on their Android project and then the Android Guys scooped up a Motorola Job posting looking for a “Senior Staff Interaction Designer” to work on a “new Android Social Networking SmartPhone” 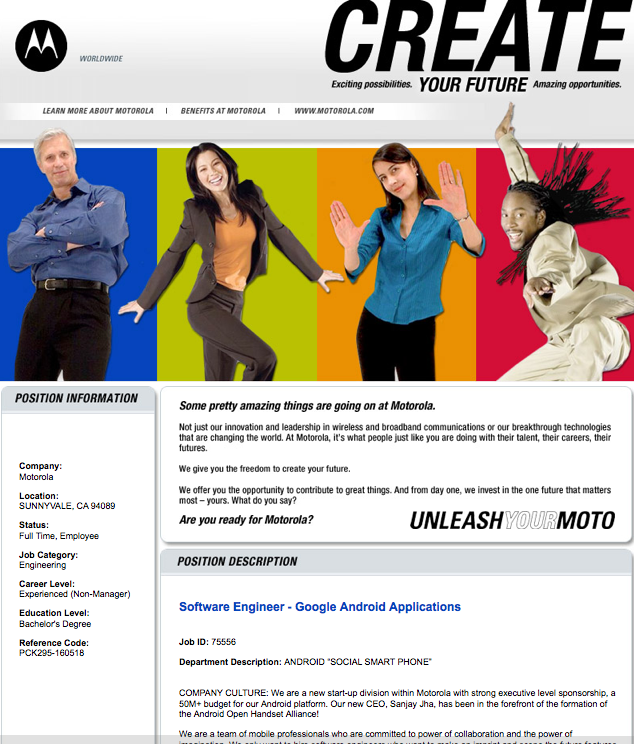 So what new info does BusinessWeek provide?

The Krave has a clear, transclucent flip which uncovers the touch screen.. although the clear flip is also touch sensitive. It would be interesting to see how that would work in a Full QWERTY environment.

So is Motorola on the right track?

Some would say with a budget of $50 million dollars and 350 people hard at work they should be able to come up with SOMETHING pretty successful. The thing is that at this point, pretty much any half decent Android Phone is going to cha-ching the registers but will the sales be credited to Android being great or Motorola making Android great?

So… correct me if I’m wrong but one of the greatest benefits of Android is that it saves money on producing a proprietary OS and software to go along, with those savings (potentially) passed onto the consumer. Third party developers are able to make software for Android and many of them are social and geographical based – MySpace for example, just released an application on the Android Market.

So why is Motorola focusing on building a “Social Phone” based on Software and Application Development? This is exactly the type of thing they SHOULDN’T get wrapped up in… and that they should let the development market handle. I mean, I’m sure they’ll create something cool but will they trump FaceBook, MySpace and other applications at their own game? I doubt it.

Motorola should be focusing on the HARDWARE. I hope they prove me wrong and release something amazing but I wouldn’t bet on it. It seems like they’re just reaching for that “Social” buzzword and hoping the consumers come with it as long as they develop a few social applications.

Even if that is the case the phone won’t fail… it’ll probably do rather well simply because its one of the first Android phones. But, I can see a load of people getting the phone, taking it home and downloading Android’s Facebook Apps, MySpace Apps and other 3rd party apps that they use instead of whatever Motorola developed.

The other explanation is that Motorola is spending their money ALLOWING the most Socially popular of these applications access on the phone and muting the rest of them. So for example you could use Facebook, Twitter, MySpace, LinkedIn, etc… but other applications from the market would be off limits. This would be the most unproductive use of $50 million dollars I can think of – spending money to REMOVE functionality so you can offer your customers LESS.

But truth be told I don’t know WHAT those crazy folks over at Motorola have planned. But what I DO know is that they haven’t had much success since the RAZR. And yes, the RAZR was and is a blockbuster success but their current sell-out rumors go to show that you can’t have 1 successful phone every decade.

So what is Motorola cooking up and how will it be different from any other phone that comes with Android… and all those 3rd party social applications?